One of the world's largest generating set installations became operational in July 2009, powered by over 500 FG Wilson units. Aruanã Energia, one of our Dealers in Brazil, installed and commissioned an impressive 576 x P675P5 generating sets over a nine month period to a site in the town of Igarassu, Pernambuco.

When combined, these generating sets have the capacity to supply a total output of 236 MW of standby power to the national grid in Brazil. The power plant is expected to operate between 1000 - 2000 hours every year during times of peak demand and to provide additional power during the winter months. Our Dealer, Aruanã Energia, successfully won the contract in June 2006 to supply two power plants, Pau Ferro (94 MW) and Termomanaus (142 MW), which were later merged on to the same site. As part of this contract Aruanã Energia, have been appointed to supply power via this installation for the next 15 years.

Aruanã Energia, were contracted to supply and install the following: 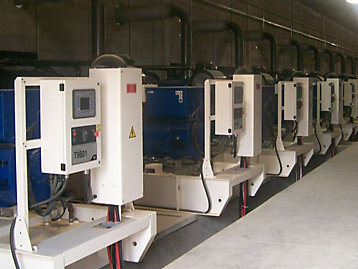 The installation was a difficult challenge due to the extreme weather conditions and the great terrain. Pau Ferro and Termomanaus power plants were designed to be the most cost effective solution for standby/peak shaving applications for the Brazilian power market. These costs savings are gained through the innovative use of highly efficient diesel engines as the main source of power.

Traditionally, larger more expensive industrial, locomotive or ship engines would be used in Brazil for standby/peak shaving applications. This unique design was the most cost-effective solution available and was based on a 15% annual plant utilisation factor. Some of its most impressive features include very low acquisition and installation costs, optimised fuel economy at all dispatch levels and low operations and maintenance costs. The generating sets operate at 440v and step up to 34.5 kV transformers, which again step up to the 230 kV transmission grid line. A single plant operator remotely controls each plant, via a stateof- the-art SCADA system which was developed specifically for this project by our Dealer Aruanã and FG Wilson. This advanced control system dispatches and regulates power from the generating sets as required, with a user friendy interface. This provides tremendous savings in operating and maintenance costs over the lifetime of the power plant. Aruanã Energia, hope to market this type of plant for smaller distributed power stations in the range of 50 MW, with a focus on isolated power systems in developing countries and remote industrial operations such as mining sites.

Aruanã Energia, are an FG Wilson Dealer and independent power producer that has been active in the Brazilian power market since 2002. They have participated in projects that have supplied over 650 MW of power in Brazil.