Power Electrics, the diesel generator specialist, received a record number of emergency call outs over the Christmas and New Year period in order to deal with the recent storms in the UK. With more than 120 flood warnings around the country and over 250,000 households without power, the major utility networks required generators to provide temporary power while restoring the mains.

Contingency plans were put in place with contracted customers to ensure generators were available to be dispatched around the South West and South East. Power Electrics' response times were reduced by the addition on Rapid Response Units within the rental fleet, a 500kVA generator built onto a lorry which is ready for instant dispatch. Along with the new Rapid Response Units, Power Electrics rental fleet includes a large range of generator sets mounted onto trailers which can be towed to areas which lorry's may not be able to reach.

The storms brought an aftermath of flooding through the coastal areas of the South West. Pumps, powered by diesel generators, were required to relocate water out of residential areas to reduce damage to properties and free up the transport networks.

"An unprecedented number of call outs over the Christmas and New Year period gave us a chance to demonstrate our expertise and scope of delivery. Extra drivers and engineers were brought in to ensure our customers received the power they required to fulfill their own Service Level Agreements." 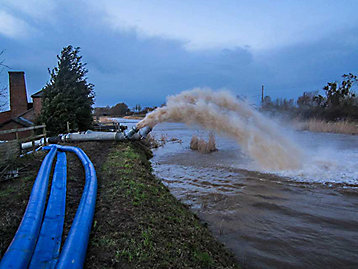