This site uses and sets "cookies" on your computer to help make this website better. You can learn more about these cookies and general information about how to change your cookie settings by clicking here. By continuing to use this site without changing your settings, you are agreeing to our use of cookies.

Note that by entering data in this application for purposes of obtaining driving directions, you are providing such data directly to Google LLC and/or its affiliates.  By clicking "I Agree" or by using the Google Maps functionality to obtain driving directions, you acknowledge and agree that use of Google Maps is subject to the then-current Google Maps/Google Earth Additional Terms of Service at https://developers.google.com/maps/terms-20180207#section_9_3  and Google Privacy Policy at https://policies.google.com/privacy

As one of the leading global manufacturers of gas and diesel generator sets, sporting arenas and stadiums are increasingly turning to FG Wilson, to ensure that their programme of sporting and music events run without a hitch.

The Aviva Stadium in Dublin, formerly Lansdowne Road, is a world class venue for rugby, football, concerts and business conferences and everything from the scoreboards and the floodlights to the under pitch heating is powered by FG Wilson generators with a 6.8 MVA power rating. FG Wilson has installed power generation sets and runs ongoing maintenance contracts at other stadiums including Croke Park, Casement Park and Thomond Park.

In its original incarnation, Lansdowne Road stadium was the oldest sports stadium in Europe but after a complete rebuild programme in 2007, the 50,000 all-seater Aviva Stadium re-opened in August 2010.

FG Wilson, invited to tender for the power supply through the main contractors Kentz, secured the order due to their technical expertise in ensuring the delivery of a bespoke solution that was integral to the look and feel of the finished structure and their early involvement with the stadium redevelopment. 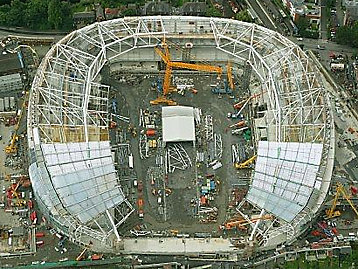 Immediately FG Wilson identified that to deliver the power requirements of this site, four 1,700 kVA generator sets would be required. In concealing the generators in a very compact space underneath the stadium seating (level 7), the aesthetics of the stadium remained intact and prevented the need to house them externally in a storage facility, as is often the case. All air-handling, cooling systems, exhaust units and switchgear were also concealed within the envelope of the stadium's expansive seating racks. In conjunction with the project architect, the exhaust system was moulded into polycarbonate blades of the surface structure of the stadium meaning no protrusions or exposure to rainwater. The exhaust is fitted with its own drainage system to keep rainwater out.

During stadium events, the generator sets operate in parallel with the ESB mains supply to supplement the stadium's power demand and also deliver no break standby power on mains failure.

In order to deliver this control philosophy FG Wilson designed a fully integrated control system, based on the Allen Bradley Hot-standby PLC platform. This delivered a high level of system redundancy and greatly increased the operational security of the stadium.

The timing of the installation of the generator sets was critical as they needed to be in situ prior to the fixing of the seating racks above them. Any delay in the positioning would have had impacts on the timeline for the seating construction above. This part of the project was completed to schedule so enabling the further smooth running of the stadium build.

Another challenge overcome by FG Wilson was noise. The Aviva Stadium is surrounded by residential properties and the power product solution had to guarantee extremely low noise levels. This was set at 53 dBA at 1m, which is low for this type of installation, but as the surrounding area is a highly desirable residential development, minimal noise was critical to the overall success of the scheme.

Another advantage presented by FG Wilson is that all external contractors on site, from burger vans to merchandise sellers to event crews, can access the stadium's power supply rather than bringing their own generators onto the site. This was not previously possible. The capacity provided by FG Wilson's generators is 5.44 MW and at peak usage the Aviva Stadium uses on average 3.5 MW. The generators have a local 24 hr hour daily service fuel tank, supplied from a large bulk fuel storage tank to provide multiple day 100% load run autonomy.

The power solution presented by FG Wilson also has an environmental benefit in the form of a heat recovery facility. From the jackets surrounding the engines up to 750 kw of heat is 'recovered' from each machine and used to heat the pitch and provide other forms of heating around the stadium.

The installation programme, which took 11 months from tendering to completion, was completed on time and within budget ahead of the opening game in August 2010. Since then, hundreds of football and rugby matches, concerts and events have taken place with Madonna having played there recently to a capacity crowd.

David Blennerhassett, Dealer principal at FG Wilson in Dublin said: "This was a very challenging stadium project which presented a number of issues from a noise, space and design perspective. But in getting to grips with the project from an early phase and working with the M & E Consultants throughout the tendering process we were able to deliver a reliable, competitive and quality power product that exceeded all initial expectations. We had a lot of positive input from the initial stages, which was instrumental in determining the final solution.

"The Aviva Stadium was an immensely satisfying project of which we are extremely proud and as part of our ongoing maintenance programme we always ensure that we have a representative on site every time there is an event taking place."