This site uses and sets "cookies" on your computer to help make this website better. You can learn more about these cookies and general information about how to change your cookie settings by clicking here. By continuing to use this site without changing your settings, you are agreeing to our use of cookies.

Note that by entering data in this application for purposes of obtaining driving directions, you are providing such data directly to Google LLC and/or its affiliates.  By clicking "I Agree" or by using the Google Maps functionality to obtain driving directions, you acknowledge and agree that use of Google Maps is subject to the then-current Google Maps/Google Earth Additional Terms of Service at https://developers.google.com/maps/terms-20180207#section_9_3  and Google Privacy Policy at https://policies.google.com/privacy

Supporting women empowerment in the Netherlands

At FG Wilson, we believe in gender equality and we are glad to see that Koninklijke Van Twist (KVT), our dealer in the Netherlands, feels the same way. Caroline van der Heiden, one of their employees, has been a role model for the VHTO organisation for over 12 years!

The VHTO organisation’s mission is to get more girls and women interested in pursuing an education and career in Science, Technology, Engineering and Mathematics (STEM).

Research shows that, although Dutch girls are no less talented than boys in STEM, they are still underrepresented in STEM fields in higher education and on the labour market.

VHTO reckons that the difference in choice is primarily caused by:

VHTO aims to break the stereotypes concerning gender and STEM, close the existing gap and increase the self-confidence of girls and women who want to approach STEM subjects.

To do that, they also appoint role models in all the Netherlands and Caroline is one of them.

Since she was young, Caroline knew that she wanted to do something different. “I have always had a ‘I don't care what you think’ mentality, and, as they say here in the Netherlands, *‘hair on my teeth’”, she says. And as a matter of fact, she did many different jobs, where it was literally required to roll up her sleeves and get dirty. An unusual sight, considering the gender stereotypes around STEM fields we mentioned above. But challenging stereotypes seems to be a second skin to Caroline.

"It is one of my passions to enthuse young girls to pick something different than what is expected of them", says Caroline, being the living example of a woman who chose to become a mechanic for the Royal Dutch Navy, before being a successful account manager at KVT. “It can be so fun and empowering to break those gender stereotypes and show the entire world that girls can really do anything they want!”, she concludes.

We are encouraged to see such a positive role model for girls and women in STEM in the Netherlands and we wish Caroline the very best in her career!

*Dutch expression to define someone who is vocal, assertive, brave, not afraid to speak their mind. 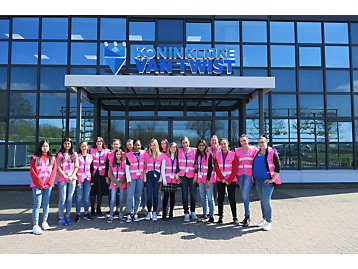 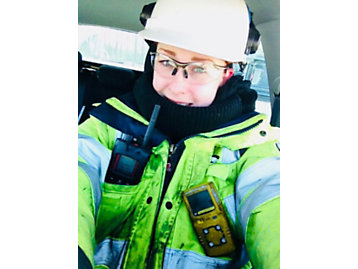